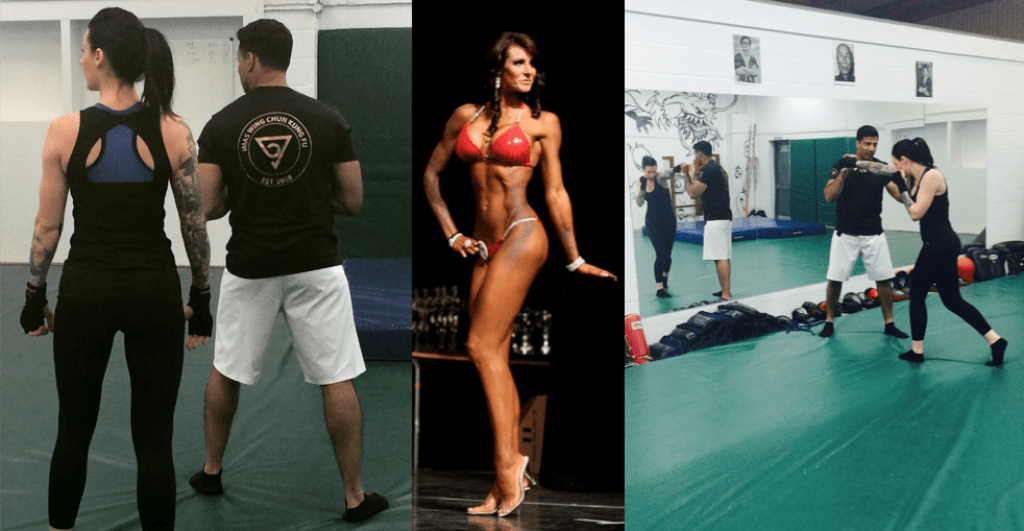 How having the perfect body screwed me up

Have you ever started something thinking that you would achieve one thing but be completely floored when it becomes something else? Something more than you could have ever imagined?

I think they call that Serendipity….

“An aptitude for making desirable discoveries by accident.”

Let me start right back at the beginning…..wise word before you read on, this is an honest and true account……

You will probably have seen my pictures of me on stage in a bikini looking lean, toned, and all glam with a great big smile on my face with big hair and a very, very, dodgy tan. That was me competing in bodybuilding shows, the bikini division of the sport.

I decided to compete in these shows initially to prove a point. What you may not know about me is that I am classed as “disabled” I have a mental health condition – Bi Polar and OCD.

The point I wanted to prove was that no matter what “disability”, “mental health” or “disadvantage” you think or are being told you have, that if you want to you can do anything. I wanted to make people see that they did not need to be restricted to a label.

However, my original intention soon turned ugly and I lost my way on a gargantuan scale. I grew miserable, weak, and mentally unstable. Obsessed with my body and how it looked. I took the judges criticism to heart and punished myself mentally that I was not as good as the other girls.

I was sent into a downward spiral of negativity around my body, hating the fact that I did not look “perfect”. I was so depressed by it and wanted desperately to win a trophy thinking that it would prove that all my hard work was for something. Instead, I was scowling about my physique, torturing myself that I wasn’t as good as the other girls!

My friends and family could see my struggles and were concerned for my welfare. So deep in the obsession with my body and my looks, I made a drastic change to my hair colour, thinking that I would be accepted into the crowd. I felt I had to be glamorous all the time to impress people and was worried that, without my hair and make-up done it would jeopardise a position for me.

My recent competition in 2015 was again another attempt to prove something. This time it was to prove that I could enter a competition and NOT be obsessed with how I looked and not to compare myself to the other competitors. It did go to plan, but there was still that little demon in there whispering in my ear.

Since I hung up my bikini and decided that bodybuilding and shows were just not serving me, I eventually became happy in my body again. But still, there were little niggles there that would take me right back to the beginning again. Something was not just quite right. So I started to search….

In an attempt to find “myself” I decided that I wanted to get back to my martial art and fighting roots, as I had always enjoyed boxing and martial arts.

I started to work with an amazing lady “Zoe” who taught me about Krav Maga. I loved this and enjoyed going to the classes. It was very odd at first because the emphasis was not about how I looked at all!!

It was so refreshing I could turn up wearing no make-up, and didn’t feel I was being judged in the slightest! It was excellent, and very strange all at the same time. My skill set started to build and started to feel strong, emotionally and physically in a way I had not experienced before. It was beginning to be fit for function.

Then I met Vik Hothi, and boy was I not expecting this

I started to work with Vik back in August when I had a couple of session with him. I was thrilled that he agreed to meet with me because I have always respected him for his art, ethics, and him as a person.

I have been plunged into a world of learning an art form. I call it an art form because it is not just about throwing kicks, punches and hitting the pads. There is a refined, beautiful process to respect and appreciate this art form, and movement.

Initially, I was tasked to learn footwork, and body positioning. This was going right back to basics for me. I thought I know how to move, to punch and how to kick. BOY was I wrong! Before I was making it hard work for myself…why….because I was not allowing my whole body to flow with the movements.

Now, this is where the serendipity started to happen.

One of the first things that Vik said to me when I was learning my jabs was “Never expect an outcome, when you are fighting if you expect not to get hurt when you do you will be hurt not just physically but emotionally too. When you expect an outcome and you don’t get the desired outcome you get hurt” This hit me like a lightning bolt out of the sky.

When I was competing I was so attached to an outcome, winning, and when I did not, you guessed I was hurt on every level, emotionally, physically and mentally.

Over the weeks I have started not to even think about my body as a tool for how people think of me. I have begun to think of it as an instrument of how I can flow with movement. How I can get strong and centred in myself. For me now it is about how my body moves, how it flows. I am feeling fit and strong for a function NOT for aesthetics. Something I was NOT expecting.

The realisation of this only just hit me last week. I was asked to attend a test shoot for a model agency and the very first thing that popped into my head was “I have to prep for this!!! I need to look my best or they won’t like me, they will judge me”.

I sat with this very uncomfortable feeling, a feeling I had experienced when I was in the body building circuit. It was amazing to be able to see it for what it was. I could almost step outside of this feeling and see it from a distance. It made me see how unhappy and obsessed I previously had been.

It made me realise how far I had come from working with Vik. It’s not about my body image, it’s about how my body flows, how it moves and how I have respect for it. When you flow with a movement and move in a certain way to get it on point it feels so good! It is magic, but if I don’t get it I just keep going, no judgment, no punishment just keep on trying.

My body issues are slowly disappearing the more I discover how I feel strong and secure in myself through movement and learning how to use my body.

It is a very liberating experience and one that I would love for every person to experience. I am slowly becoming detached from feelings of insecurity around my body. I even agreed to be photographed for a major publication with no make-up and uber greasy hair tied back! I did this with no fuss, because I feel confident in ME, in my body. I am who I am, no questions, this is the strongest and most confident and happiest I have ever felt in my body and in my soul, and it’s no coincidence. My happiness and confidence is not even attached to something tangible, it is deeper routed.

Don’t get me wrong I still have some learning to do (which I cannot wait for). For example while the dojo last week I was learning a new technique. I was struggling with it, and said to Vik.

“ah that was shit” he stopped me right there in my tracks and said to be “No, you don’t get to say that in here, I am the only one who can tell you that, you are not allowed to scowl yourself”.

Yet another lightning bolt that struck me. BAM!

In previous days I would have scowled at myself for days for not being able to sculpt the “perfect” body. Now I am using my body, not abusing it. I’m respecting it, not disrespecting it.

I am starting to find a still happiness within me that is calm, and serene.

So what last few words can I leave you with which you can apply to your life from what I have learned so far?

“In life there are always up and downs, you cannot escape it.
However it is the way that you deal with these up’s and downs that will determine how much of a harder time you have.

If you flow with the up’s and down’s and be unattached to any outcome, you will be able to roll and flow with it.

However if you put up resistance, move against the flow, and create expectations you will be hurt, both physically, mentally and emotionally.”

Why do you think that Bruce Lee’s most famous saying is “Flow don’t fight”…..